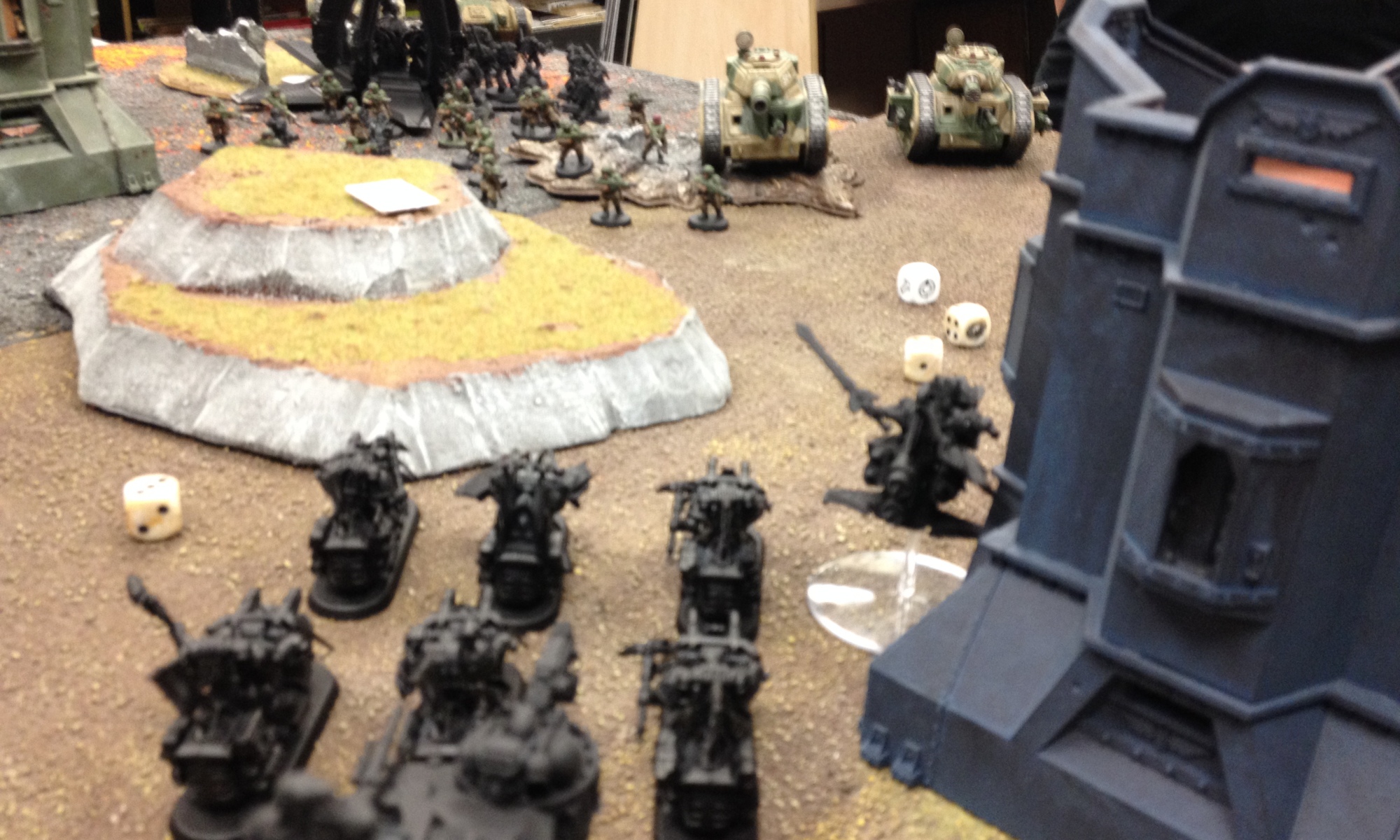 Soo…. Yesterday was a productive day of HIGHLANDER, in which I was curb-stomped twice by the Dark Angels.  It’s left me wondering why there’s so much venom out there pertaining to the Beakies-with-Robes codex.

So lets go on a journey…

So what killed me so bad?  To be honest, on paper it didn’t look like much.  Not really what I would consider a “Power List” by any stretch, but then I’m still learning this ins and outs with respect to “things to look for” in list building.

****We discovered after the game that the Chapter Master couldn’t take a bike, thus it was swapped out for an Interrogator Chaplain on a bike, who features a similar stat-line but trades the 2+/3++ for a 3+/4++.  It wouldn’t really have made a difference in the grand scheme of things in either game, I don’t think.

Scouts infiltrated, and then made use of their scout move.  Bikes advanced to be within 12″ of my lines.

The drop pod landed, roasted 10 of the blob squad.  before the turn was out, I was around 4 VP behind (based on tactical objectives), and my lines were split in half.

By the end of things, I simply didn’t have enough blocking units in order to get the job done.  Down to maybe 6 bodies in the blob, I used them to shield the russes from the drop-podding assault squad, but I knew I wasn’t going to be able to save the artillery.  The Wyvern was killed Turn 2, Manticore Turn 3

The mighty bullgryns charged the bikes who were undamaged by my entire army’s worth of shooting (being able to Jink at 2+ is pretty damned good), and lacking a CCS to strip cover I was pretty well up pooper creek.  Sammael issued a challenge, and the Bone ‘ead accepted, dishing out 3 unsaved wounds, but Sammy lived on the merits of FNP with one wound remaining.  Yikes.  The power fist killed the priest, and the unit was routed and killed.

Despite this, Pask managed to survive the first charge by the bikers, but was shaken.  He wouldn’t survive the second charge.

Handshakes after 3.  The only casualties I had really inflicted on the Dark Angels was 1 biker, 5 scouts and a Rhino, when my losses were pretty much total.

The Vendetta didn’t show up in either turns 2 or 3.  Those flamers were missed!!!

A bit of a different strategy for me.  It was basically to IGNORE the bikes entirely (with shooting, anyways) and take out the rest of the supporting cast (which wasn’t that much, truth be told)

I was able to inflict heavy casualties to the Dark Angels player this time around.  Accurate artillery fire from the Manticore nuked the Rhino before it really got going, and the Wyvern dealt 17 wounds and he failed 7 armour saves.  The Tac Squad never really bounced back from that.  The Assault Marines dropped in front of the platoon, but were wiped out to a man by Pask and the Vanilla Russ.

Where *this* game was decided, was when the bikes were charged by the Sentinels, and gifted 3D6″ free movement from the hit-and-run directly towards Pask and the back-field units.  The Bullgryns had failed their charge, and as a result were out of position to block this move.

The bikes wreaked havoc in my backfield, and while I was eventually able to wipe them out (via Vendetta and PCS, and heroics from my last Sentinel nailing the Darkshroud in assault [WOOT!]), the damage had been done.

On objectives, I lost the game dramatically.  based on on-field resources left, I had an improvement over the previous game in having 2-3 units remaining after 4 turns instead of being effectively tabled in 3 turns from game 1.

“SO WHAT’D YOU LEARN, MR. SMARTYPANTS?”

…Is what I’m sure you’re all asking…

Frankly, I’m not seeing why the internet has doomed the Dark Angels codex.

They have very interesting unit synergies that don’t necessarily involve krumping people.  I can see why people are looking at their codex and thinking: “Everything is *SO* expensive, why would you ever take this unit?”

BECAUSE 2+ FRIGGING JINKING, THAT’S WHY.  Tack on 5+ FNP for insult to injury.

This isn’t the only unit in the codex to have these kind of synergies…  Deathwing Knights are the same thing.  Base to base contact gets them +1 T.  Most people look at that and yawn, I’d imagine.  Oh well, what more does that get you?

Consider for a moment that my basic strategy involves wound saturation.  Bringing that unit up to T5 is a HUGE boost.  Bullgryn territory, with a 2+/3++ to boot.  They don’t *NEED* a Dark Shroud.  Might as well not shoot at them with lasguns.  Gribblies are useless without toxin sacs, Furious charge counts for not.  With the shields I wouldn’t run Monstrous creatures into them… So what does that leave…?

RUN AWAY.  Seriously,  Outmaneuver them.  It’s just very hard when they drop in your face accurately like that, or have a 12″ move built in with Hit and Run.  *sigh*

The various banners are also worth mentioning.  6″ bubbles of AWESOME.  Oh, and fun things and gizmos like Rad Grenades (T5 monstrous creatures and T4 Bullgryns?  *shudders*), Porta-wracks, and the ability to make their Land Raiders venerable for the cost of a Paint Job.

I’m having problems with Marines now, apparently.  I can’t seem to get their number anymore.

7 Replies to “Regarding Dark Angels”