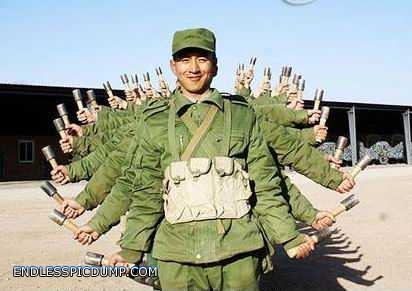 Skitarii madness around here for the past week, as I’ve been painting quite a bit in an effort to continue finishing projects.  So…. FRAG OUT!

This week represented the first full week of normalcy in the Oakenhaus.  After-work programs (and after-hours Board meetings, ugh) were back in full swing, resulting in shorter days when it comes to free time.  As a result, most of my painting productivity came before 7:00am, which can be a bit dangerous.

Getting some very early morning painting in. Only tried to use my coffee as a water pot once so far. pic.twitter.com/TQJ7hISx7R

Obviously, the Skitarii Vanguard were the focus of my attentions, as I wanted to get them finished before the end of the week.

After having completed the first two, I opted to try and batch paint the remaining 3 murderbots to see if I could get any kind of productivity going.  It actually went pretty well!  The details went a lot more quickly when you’re not switching brushes 80 times in 10 minutes.  By the time Wednesday rolled around, I had them based and good to go for a Monday posting. 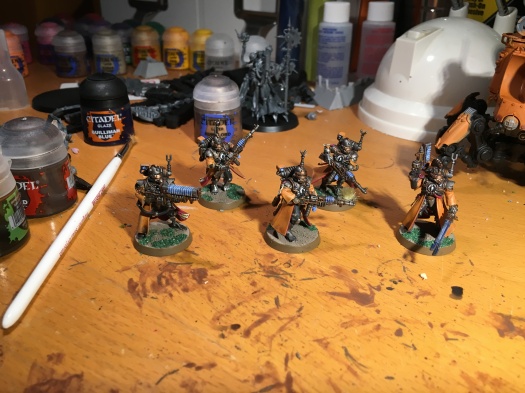 I did receive some comments that the basing material could be better (that the green flock is basically saw-dust consistency), but this is how I did the rest of the bases for my Imperial Guard… I think I’m going to leave it for now in light of I’ll probably be redoing the bases of my WHOLE ARMY at that point in time if I wanted to change it.

So yesterday morning (EARLY) I got around to working on the first Onager.  Looking at the model, it looked like there were a lot of edges, and edge highlighting would probably look…. odd on this model.  So I grabbed my drybrush and knocked off the ‘head’ of the crab and the blacks on the legs.

So not a bad week at all by any stretch!  Completed one painting project and moved on into another!

I opted to go after the Onager as a reward of sorts for finishing the Vanguard.  Those rangers are definitely next on my to-do list though!

The biggest thought I had this week with respect to list-building is the role of the Leman Russ in the Imperial Guard army list.  I think I might actually save this discussion for middle of the way through next week (because it’s a damned good one).

Generally the thought process kind of erupted from the wh40k meta food chain.  GC’s > MC’s > Walkers > Vehicles — I need to meditate on this more and will report back.

I guess another thing I can report is that shopkeep wants to fight him some Mechanicus armies.  His Tau are chomping at the bit to robot-stomp.  I’d like very much to oblige, but don’t have much in the way of Mechanicus built yet (10 footies, a dragoon and the single guncrab).  I have 10 more footies and another guncrab in the box.  There might be a frenzy this weekend…

DERP of the Week:

Y’know what?  It’s been a pretty good week.  So I’m going to go back in time, when I wish I painted an arrow to remind me that yes, THIS WAY IS UP.

Weiner Dog Wurst of the Week:

This week’s best dachshund award goes to this guy, who is fully prepared for just about any siege situation (or simply resisting cat ambushes). 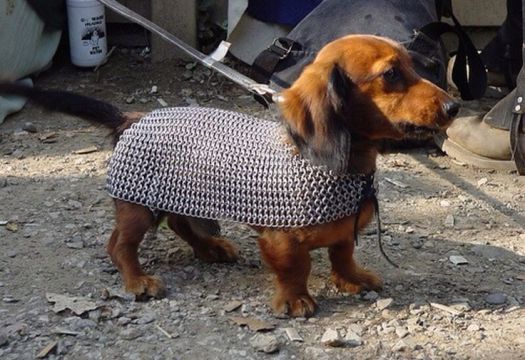 ….  This remains the best section of this friday format.

Goals for Next Week:

Now, this might seem a little bit more modest, but given my weekend ahead (D&D night this evening, visiting some friends out of town tomorrow, church commitments and luncheon plans for Sunday, and a whack of work to do next week), I feel like this is probably a good goal.  If I can accomplish more, then I’ll be immensely satisfied.

For now, just focus on the Onager!

If you have any suggestions for weekly headings for the Frag-Bag hit me up in the comments below.  Part of me wants to have a mail-bag Q & A thing, but I doubt I get enough traffic to make that a thing.

Cheers guys, have a great weekend!