So progress (and thus posting regarding progress) has been slow lately as I continue to blow up virtual boats with some good friends on World of Warships.  I’ve done enough lately to warrant a post however, so here goes!

(Note: The image above is kind of my painting reference with respect to the scheme I’m shooting for.  Again, all credit to Mr. Asmussen of bismarck-class.dk)

In between games of WoWS, I got some painting done… Kind of as a proof of concept that my current painting methods (involving washing and drybrushing the bajeezes out of everything) would hold on at least most of the superstructure.  I was encouraged by the results:

Not bad eh?  It’s kind of fun to think of the whole ship brought out like that, so I got to painting the more mundane things like the dark grey decks on the forward superstructure, and stuff like that.

I mentioned previously that the biggest psychological hurdle for this project was the huge flat open space that is the main deck.  In particular, texturizing it, as well as avoiding big nasty brush strokes on a huge open space.

Welp, I can fret no longer, thanks to the help from my Chaos Bro, who comments occasionally here as ‘Travis’ (if that is your REAL name).  Behold!  The power of a fully operational airbrush. 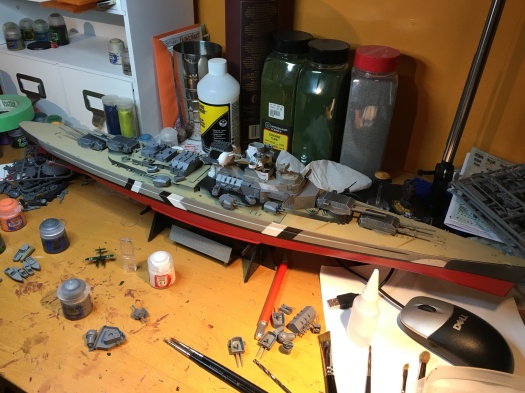 After farting around with the brush for about 20 minutes, this took about 10 minutes to get down in a relatively even coat.  I might add another coat for the mid-section, but seriously.  I’m over the moon.  It would have taken me an immeasurable amount of time to get that coat down, and getting it so even would have taken even longer.

As a bit of follow-up from my previous post with respect to masking techniques, we did attempt to do that on the deck, but we couldn’t quite get the masking tape to work for us in that respect.  It might simply be easier for me to paint on little decky-strips or similar to give the illusion of texture.  Our Lady of Blessed Steady-Handedness, do not fail me now.

Those whom are astute will also note that the boat itself is slightly stripier than it used to be.  I’m starting to put the baltic camo on the superstructure now, and it’s proving… interesting.  It very much is an exercise in perspective, because if you’re even slightly off the lines will appear crooked.  This is why I’m kind of taking issue with my line-drawing sample picture that I’ve used at the very top of the post, because it has the benefit of perfect perspective.

EDIT: Here’s the above photo zoomed in a tick 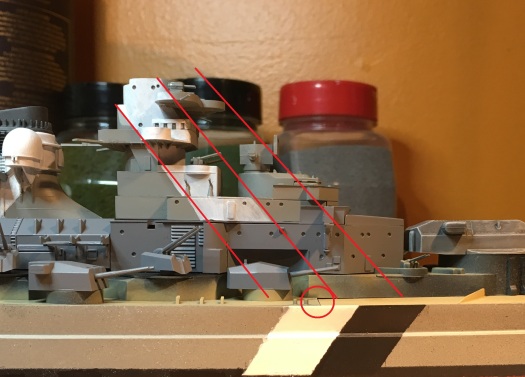 I’ve been having better luck lining the stripes up with absolute indicators per the line drawing above at the heading, but it does take a bit of trial and error to make things look good.  You can tell by how I’ve marked that line in that I’ll have to tweak the white a bit at the 3rd and 4th levels if it makes sense to do so.