My painting progress has been sub-glacial lately, but I finally have  some pictures to show off and maybe build upon.  While a lot of my time has been spent playing virtual boats, sometimes I like to hunker down and watch the Blue Jays kick ass and take names while putting paint on things.

In order to get an appreciate for where we’re at presently I’ll refer to an old picture:

At this point, the decks hadn’t really been started on any of the superstructures, and the vertical walls had some of the primer still visible, or overspray from the application of the wood deck.  Here’s where we’re at now: 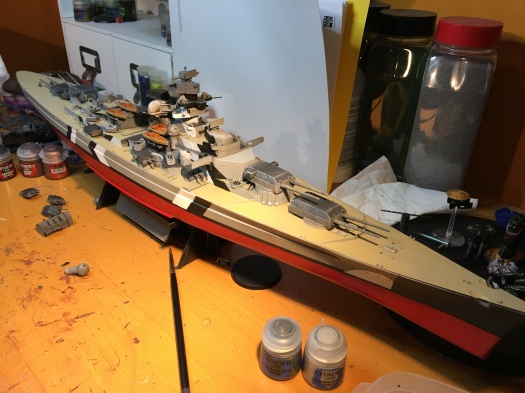 Immediately you can see it’s a lot stripier than it was before, particularly on the superstructure.  I’ve also re-applied the greys to areas of the over-spray, and hitting the details on the deck that were previously brown. 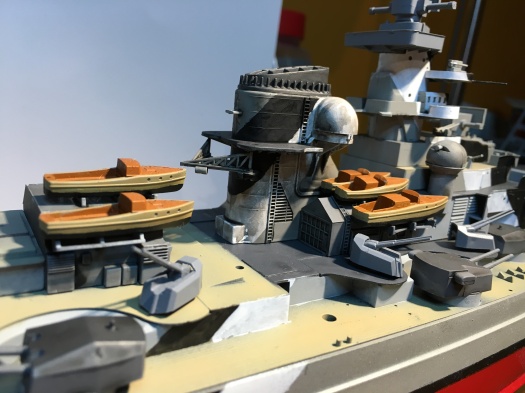 I’ve also been playing around with some shading, as you’ll notice at the main stack, which was kind of my testing grounds for the remainder of the superstructure.  I like how grimy it looks now.  The Nuln went well over the whites also, which I was skeptical of.  I’m going to have to attack it with highlights and such (as with the artillery which I finished previously) but progress is progress! 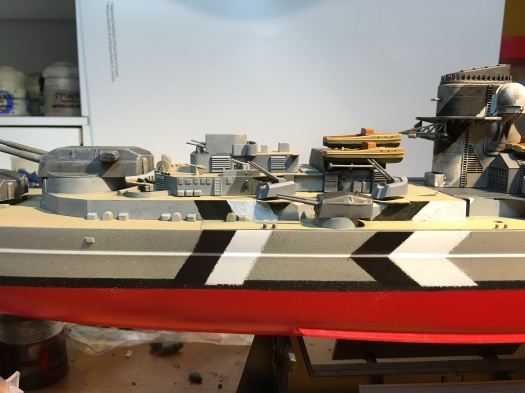 That isn’t to say that I haven’t had any set-backs along the way.  Roughing in the grays but leaving space for the black and white stripes, I incorrectly predicted how the black and white go onto the superstructure.  at the main deck level I’ve corrected for this, but the 2nd and 3rd decks above the main I’ll need to do some fixing.  It should go pretty quickly though.  Most of the blacks & whites I’m going to need to go over again in order to clean it up and get the brush-strokes off of there, but again, progress is progress!

It won’t be long now before I start painting all of those tiny deck adornments, shading, and drybrushing the bajeezes out of the superstructure.  Until then, i’m plowing onwards!