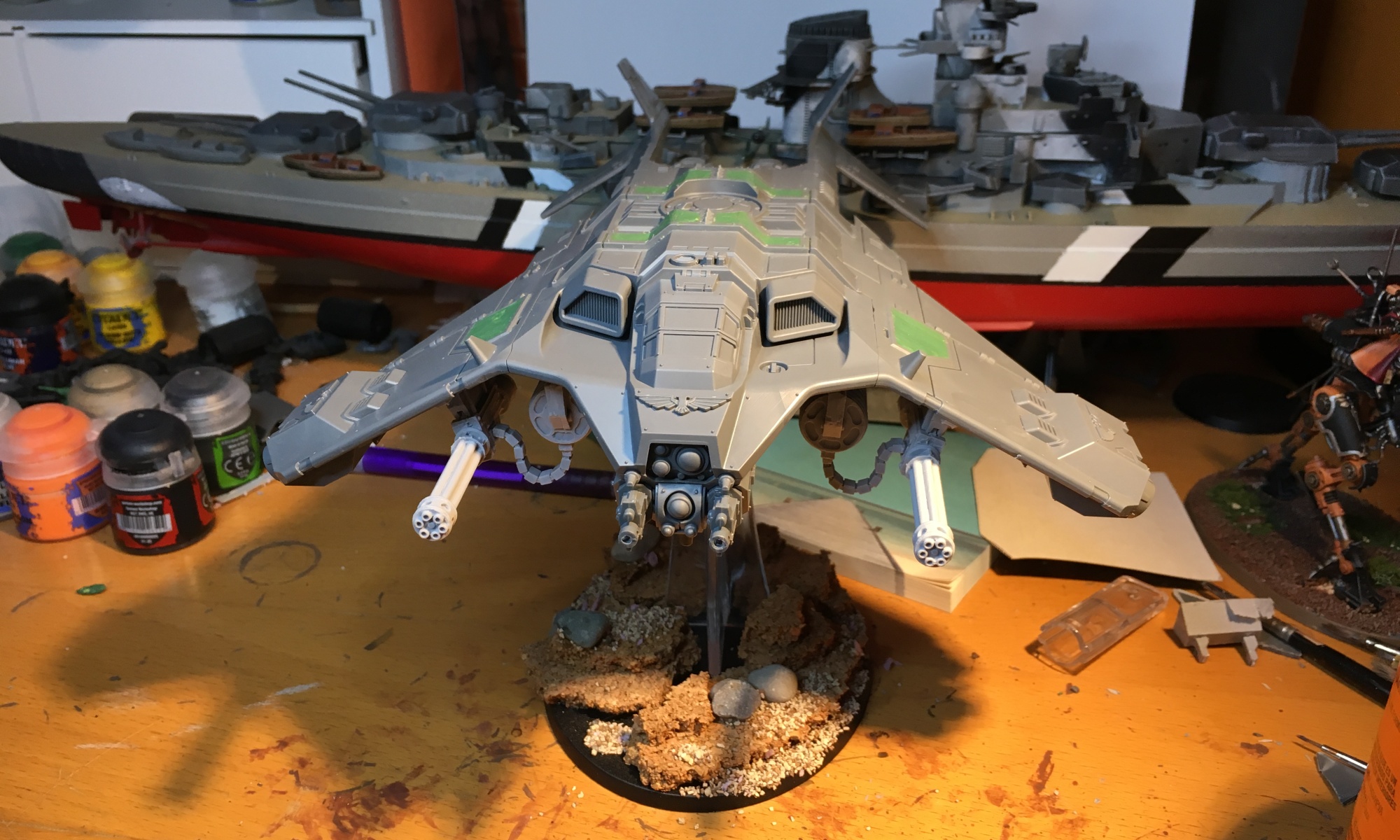 ++++++++++++
The first sip of Emperor’s Finest StimCaf tasted strangely bitter this morning to Colonel Wishart, sitting in his Command Chimera.  Gagging, he resisted the urge to fling the cup at the driver, who probably brewed it using the primary oil filter again.  The tankers felt it was a right of passage.  The infantry (rightly) thought they were insane.

Perhaps reading his thoughts, his vox officer took the cup away from him before he created a regrettable mess.

“Message from the front lines.  Second platoon’s located and secured a crashed Inquisition vessel, Blackstar class.  It doesn’t appear there are any survivors.”

Wishart wrinkled his brow in contemplation.  Having Deathwatch involved in his airspace was an indication that the battle is about to get a lot hairier.  Despite a large Imperial Armada presently in orbit, the navy was no-where to be found during the fierce fighting these past few days, which makes ground operations needlessly difficult.  His relationship with the navy had been… Acrimonious as of late.

“Did second platoon indicate the condition of the craft?”

“Poor, but it may be serviceable.”

The gears continued to spin.  “Send it on our chief mechanics to take a look.  Do not alert the Commissariat, Inquisition, or the Mechanicus.  …We’re going to need all the help we can get.”

Both knew there would be no Tribunal hearing if anybody dressed in black found out about this.
++++++++++++

I’ve really wanted a Vulture Gunship in my army for quite some time.  I’m a big fan of Close-Air-Support aircraft as it pertains to mechanized operations.  I’m also a big fan of throwing buckets of dice at enemies, because statistics has a nasty tendency to humble even the mightiest of armour saves.  Throwing more dice means more possibilities of that dreaded single pip facing the ceiling.

The Forgeworld model on the other hand was kind of yawn inducing for me however.  It eschews the human payload of the Valkyrie for a  LOLHUGE engine, which frankly I’m not too much a fan of, with the horizontal turbofan being immediately behind the cabin.  If Valkyries are the Huey Helicopter of the 40k world, I’d prefer to not simply give the Huey a hilariously large engine and give it a few more guns.  Just… didn’t feel right to me.

Thematically, I pictured this craft being more along the lines of a helicopter with a pair of gun-pods on the pilons, like maybe a Cobra Attack Helicopter or the Apache Gunship.  My initial target would therefor be something along the lines of the Dragonfly, by Puppetswar.eu

I wasn’t extremely enthusiastic about working with Resin though, after my last experience with it, which is why this idea has sat up on the shelf for so long.   In full hobby ADD however, I obviously also got very distracted by Tyranids as well as the Mechanicus…

That’s when the Inquisition showed up.  Their flier, in my opinion, vastly outstrips the Storm Raven in the aesthetics department.  Sleek and comparatively streamlined it gives you plenty of guns to remain on-station and provide fire support.

…from that point on, my course was set.  In general, I was picturing the punisher cannons replacing the transport bays.  This would take some structural redesign.

++++++++++++
Col. Wishart looked over the downed craft with apprehension.  It hadn’t so much “touched down” as it appeared to have”belly flopped” out of the sky, causing significant structural damage to the transport bay.  The underside of the craft was effectively twisted metal, torn to pieces on the craggy rock surface, but as advertised, the ship was largely intact.

The same could not be said of the occupants, who were strewn about a 50m radius, with the exception of the pilot.  Astartes are generally able to withstand high G maneuvers.  That this one hadn’t testified to the force of impact.

Somehow, the Adeptus Mechanicus had caught on to Wishart’s scheme.  At present the Holy Requisitioner Ironstep was picking over the charred engines at the rear.  It was pointless to try and pry him away from the prized craft at this point.  Much clicking and whirring was going on, both by the Techpriest Dominus and its accompanying servitors.  Charlie Company’s mechanic and accompanying Ogryn entourage were watching with interest.

“Will she fly again, Dominus?”  The mechanic lacked any semblance of reverence to the venerable post-human.

Wishart personally thought this “Machine Spirit” stuff was pretty hokey, but the thought of a covert Inquisition vessel simply falling out of the sky was alarming.  At this juncture, he would humour the Dominus, even though he knew that humour was not something the Mechanicus was programmed to understand.

“Did she indicate what brought her down? ”

*click-whrrrrrrrr* “An acute shhhhhort-term warp sssssstorm.”  If it were possible for the Mechanicus to express contempt, that would have been it.  Surely.  Did he imply sorcery…?

More contempt, but this got the Ogryn’s attention.  Wishart could hear a faint “hurr hurrrr hurrrrr”, high fives from behind the starboard tail fin, and a snap-hiss of a turbo oxy-torch igniting.

The Tech-priest seemed abnormally helpful in this instance; the Mechanicus only ever consider their own ends.  Who knows what their motivation was in this case.  Getting their metallic tentacles on Inquisition Tech?  That might be it… “Keep me apprised.  I want this thing airborne yesterday.  We’ll need it in the days ahead.”

Wishart turned to walk away. “Wait….. Who’s Jenny?”  He swore the Dominus’ blue optic implant winked at him.

With all the grace of an Ogryn, I started carving up the Blackstar kit.

Perhaps unfortunately, the transporty-bits to be carved off are integral with the underbelly of the craft.  They would need to go.

And this is what we were left with.  I needed to leave some of the ‘butt’ assembly in place, otherwise the engines would look really weird.  The body itself was cut at the ‘arm-pit’ with the intent to plate it in with sloped, somewhat aerodynamic plates.

Naturally, these are field repairs, so I used diamond pattern steel.  Because what else would be available in the middle of Abaddon’s 13th Crusade?! 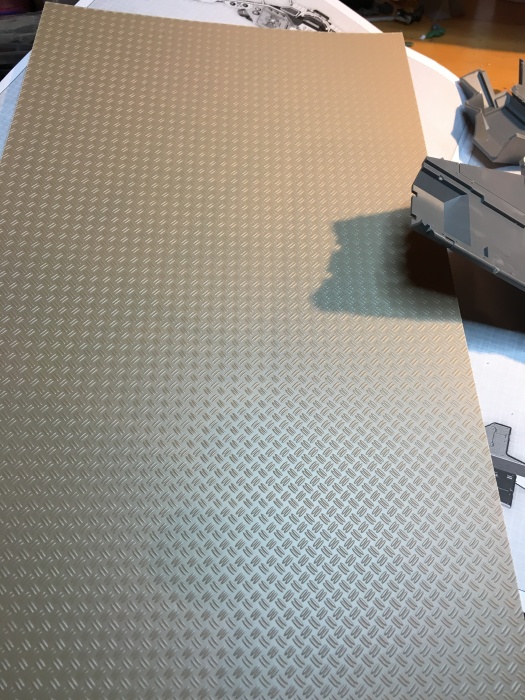 Anyhoo, on a sunny afternoon I got to plating this bad-boy in.  I want to stress this is my FIRST TIME scratch-building something.  I’m not totally pleased with the results, but sometimes you can get paralyzed on a project through indecision.  The Crusade waits for no man, and it’s time to make mistakes on an $80 CDN piece of kit. *sobs*

Opening salvo!  Keep ‘er going bud!  (In hindsight, I should have put a few structural bulk-heads in places, this would have allowed me to control the form and made gluing the plates in a hell of a lot easier.

Not bad eh?  Still pretty sleek?  Those plates are pretty rough, but they’re on the underside of the plane and will eventually be covered up with a truly HILARIOUS amount of DAKKA.

Before I move on, I’ll show off the full underside with the plating in… Just in case someone wants to replicate my haphazard approach (for whatever reason). 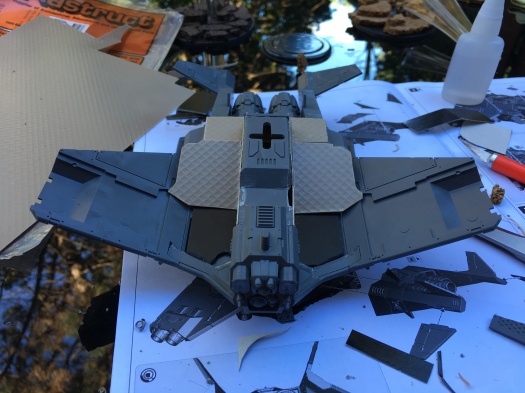 Then out came the green-stuff, to fill all of the gaps from the plating.  I think I either need better green-stuff, or sculpting tools to make this process easier and not so range-inducing.

That’s when the fun really got going.

I was really worried about the ammo belts, but I had nothing to be concerned with.  Of anything, the ammo belts responded the best to the hair-drier technique.

And that’s where we’re at presently.

It was a hoot to build, and it’s going to be pretty fun to paint too.  I’ll make a separate post on that one when I get around to doing it.