Around this time of year, everyone starts counting down their TOP X’s of 2017.  Frankly, I don’t have enough to fill out a TOP X.

Personally, 2017 has been amazing in terms of growth and what I’ve been able to achieve.  In terms of hobby, it’s been pretty meh, despite the golden age that is 8th edition.

On this basis, knowing full well I could have done a bit better with my hobby, I’d like to rattle off the stuff I’ve worked on over this year.  Basically I’m shaking down my camera roll, and if it comes out as a stream of consciousness, that’s because IT TOTALLY IS.

At the tail end of 2016 I was wrapping up the black clad lunatics.  They’ve got a new codex coming out in a few days, and I’m excited I had the motivation to paint them fully at the start of this year.  I guess I wrapped them up in April or so, and was excited enough to write a blog post about it!  *GASP*

It was around this point in early January that I got delusions of grandeur and started batch-painting my outstanding Ryza foot soldiers.  Something inside of me died painting 2+ coats of orange over black, to achieve even a remote semblance of even coverage.  This project remains on-going, never completed, and includes the Rust-Stalkers and Kataphrons that went along with them.

A big plus out of this is that some of these projects actually did get completed, like the Kastelan Robots:

And their attendant Data-Smith, who I enjoyed painting SO MUCH I adopted his confused, data-addled mind as my twitter avatar.  SO. MUCH. DATA. 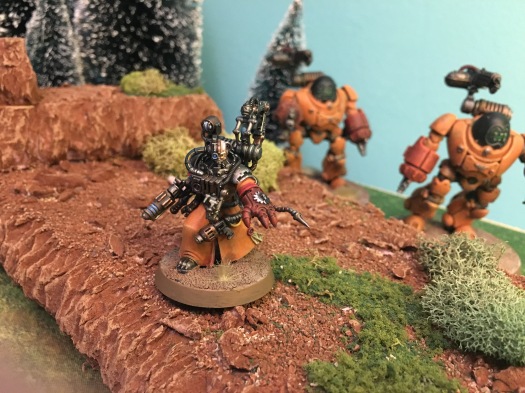 Shortly thereafter, I accepted a twitter challenge to paint Brother Mookius.  He was kind of fun too.  I still haven’t finished the whole tactical squad yet.  *SIGH* another day perhaps.

Mookius took me about a week or two to finish.  This Vanquisher?  2 days.

And then this happened:

And when Oak and Dark Imperium love each other very much, something like this happens:

And then some of this: 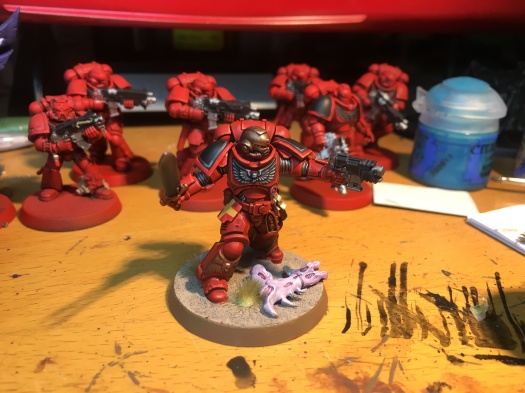 Thereafter some of this:

and so that’s when I bought this:

and everything came to a screeching halt.

…That is until I snapped in September and got things going again.  I finally finished this project that I started in like… May

and then switched gears in October to paint this hangryboi as part of the #Dreadtober celebrations.

But not before this inquisilady

Presently, I’m chewing on “I went to Ryza and all I got was this crappy Cawl” Belisarius.  He has so many hoses and bits and lenses and gems and such.  Frankly I just need to get him done so I can get the assembly line rolling again.

So where does that leave me at the end of the year?

That’s…. That’s not actually as bad as I initially thought it’d be when I started writing this post.  Huh.  I guess this is why I blog, eh?

Y’know what?  I’m not even going to set goals for next year, short of “Continue Enjoying the Hobby I Love.”   Anything else would set my expectations too high, and my morale would suffer whenever I come up short of them because of other stuff in my life is happening THAT I AM ALSO IMMENSELY PROUD OF.