Colonel Wishart took a long pull on the mug of Emperor’s Finest cafestim, hoping the warmth would take away some of the chill in the air, and the edge off of the voices he could hear nibbling at the back of his head.  His head cocked sideways, regarding the cup holding the ‘liquid’ in his mouth for a moment.

This was hardly Pvt. Baldwin’s finest cup.  Far from it, in fact.  It’s hard to be picky though when your only heating element is your Chimera’s engine block, and you left your supply lines about 150km behind you on the road to Hive Cluster Delphi.

The offensive through the Cults of the 13th Crusade had been a little **too** successful. A brilliant armoured spearhead was able to crush the poorly equipped servants of Chaos, though truth be told it appeared as though their attention had been drawn elsewhere…  Months of a grinding stalemate suddenly broken and exploited in a single day…?

He took another pull, this time unable to conceal his contempt:

“BALDWIN!  Are you sure you didn’t use this cup to clean the Regimental Latrine?!”

Wishart considered the cup, slowly looking up into the cabin mirror to lock eyes with the suddenly sass-filled private.  “We’ve also got a surly Commissar 2 transports back, I’m sure he’d love a cup.” It was well known in Charlie Company that a normally grumpy Commissar Potapenko as particularly pissed after cultist had shot away his bottle of Stolichnaya.

The veterans of several campaigns sharing the transport had stopped cleaning their weapons to watch the exchange, smiling.  Baldwin would get a chance to prove he had more than a mouth on him once they arrived in Delphi.

The Cicatrix Maledictum grinned across the skies of Ryza, from what he could see between swirls of radioactive dust.  The warp storm made communications with Regimental Command difficult, and Regimental Command was not getting through at all to Supreme Command, located on the Astartes Strike Cruiser Sanguine Tear.

Hopefully the equipment in Delphi would have more range, and he’d be able to report the breakthrough…

Brother Lucius:  Our forces have crushed the Black Legion at Delphi, and a search pattern has been implemented for the texts that you seek.  From what we’ve been able to tell, the Cadian 445th is still in a Stalemate 200km from the City, so we should be gone well before they arrive.

M: Good…  The Mechanicus must be curious by now?

L: I’ve got them occupied in other sectors.  I may have implied there was a archeotek reliquary buried in the sands 300km away from the front…

M: Good.  I must emphasize our presence in Delphi must remain concealed…

L: I know too well, I have my orders from Brother Corbulo, also.  We are of the same mind in this matter.

The Blood Angels deployed strongly on the Objectives, being able to move about and secure as needed.  In a similar manner the IG deployed in an attempt to limit the drop areas for the Assault Squads that were in orbit still… 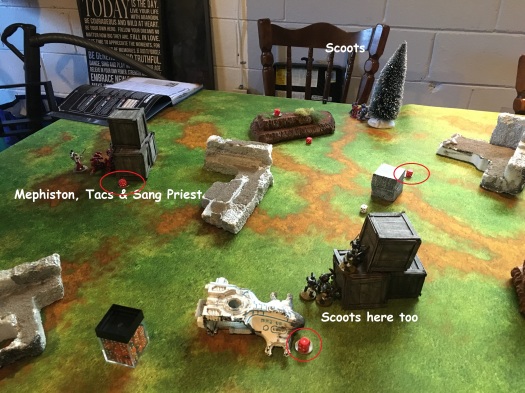 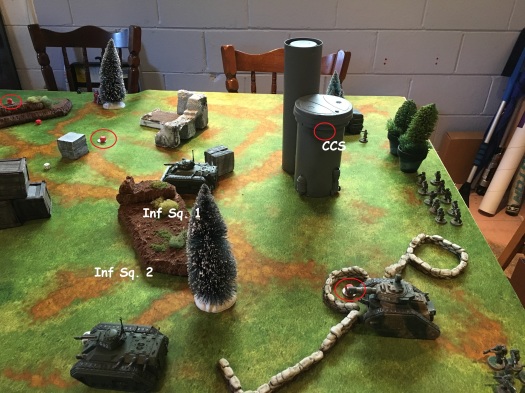 The Blood Angels come out strong in the first turn, securing 4 victory points largely dependent on Board Control.  Mephiston eschews the relative safety of the back lines, kicks on Wings of Sanguinius and joins the scout squad in an open field objective.  Mind-bullets ring out, stripping a few wounds off the lead Chimera, but the remaining shooting is of no avail, the armour is too thick for heavy bolters this turn…

As the Guard awaken, Mephiston’s ad-hoc body guard explode in a red mist, as the battlecannon from the Leman Russ MBT strikes home.
The remainder of the Guard’s shooting is somewhat ineffective against Mephiston’s 2+ armour save however, but he’s feeling pretty lonely out there.  After 1 full turn, the Blood Angels hold a 4-3 lead in objectives…
Turn 2:
Undeterred by the sudden accuracy of the Leman Russ, Mephiston summons the reinforcements, two assault squads crashing down in front of the Taurox housing the Company Command Squad, and The Rowdy 3 brandishing a very cruel looking hammer at the Leman Russ.  4 Charges are declared, and all 4 go through.  Mephiston rips apart the Chimera for Infantry Squad 1 (thanks to The Quickening), but the rest of the armour comes off unscathed, the Death Company rolling particularly atrociously against the Russ…
On the Guard’s second turn, not as much is accomplished due to a particularly poor objective pull.  The Russ backs up, but is unable to shoot, accepting that he will likely be charged again…  The CCS bails out and unloads double-tapping plasma guns into the assault squads, who then proceed to roll 3 6’s, losing only two marines (oof).  Feeling ballsy, the infantry squads unload (one from the burning transport) and blaze away, afixing bayonets, and charging the Lord of Death.  He hacks apart 4 but takes 3 wounds in return under significant duress…
At the end of Turn 2 the Blood Angels hold a commanding 8-3 lead in victory points, but things are looking really grim for the Guard being pinned back and largely unable to draw more objectives.
TURN 3:
The Guard’s luck dries out as The Rowdy 3 assault the Russ once more, tearing to pieces.  The assault squads take offense to the plasma barrage they took earlier, and eviscerate the command squad and commander, while also tying up the Taurox from shooting anymore.  Mephiston manages to zip away upon the Wings of Sanguinius on a single wound, leaving the infantry scratching their heads.

At this point its largely handshakes, with the Guard unable to make an impact on the game.  An attempt at a moral victory is rudely taken away by Mephiston, who refuses to die after being hit by Infantry Squad 2’s Chimera (you’d think….)

Final score wound up being 11-6 or so, not that it matters much.

A great game, overall, and the Blood Angel’s second victory in a very young career as a commander.  Next time I’ll bring the full armoured company and see if they get off so lucky…. hehehehe….