My god, I’ve been playing Warhammer wrong all this time.

Big ups to the folks at The Dice Abide.  Time to go make myself a Caucasian.

The thought occurred to me late yesterday that under the Militarum Tempestus Codex, Taurox Primes can be taken as Fast Attack choices.  Which has very interesting implications if you want to take them as transports for your regular Astra Militarum Veterans. END_OF_DOCUMENT_TOKEN_TO_BE_REPLACED

But this isn’t necessarily a bad thing.  I’ve been spending a lot of time with my family over the weekends, and been generally active doing other constructive things during time that would normally be assigned to throwing dice and shouting “Pew Pew”.

I hope to get a few games in over the coming month, particularly against some Dark Eldars, which is in the midst of its 7th Edition Release.

In the meantime, enjoy a picture of my dog in a Canoe.  Behold, the destroyer of dreams, and devourer of worlds.

It’s been quite a while since I picked up this series, but given that I haven’t played many battles lately (life gets busy late-August), I can probably pick-up where I left off:

END_OF_DOCUMENT_TOKEN_TO_BE_REPLACED

The FLGS wrapped up a campaign in which I took part in (missions here and here).  The Missions were well thought out and dripping with character.  Today we kicked out all of the subtlety and left everything on the table.

The mission was a fight over the central objective, but every unit that was removed was worth a kill point.  The Imperial forces wound up winning the game on this basis, because a Land Raider and a Stompa wound up contesting the central primary objective. 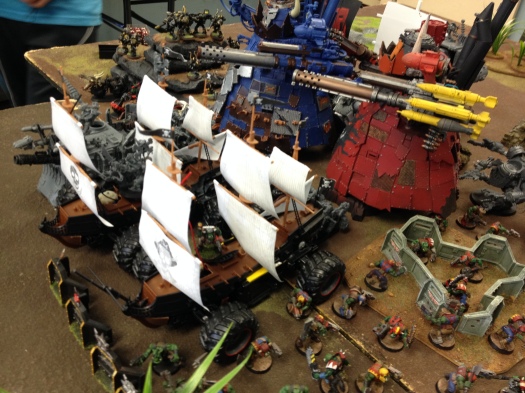 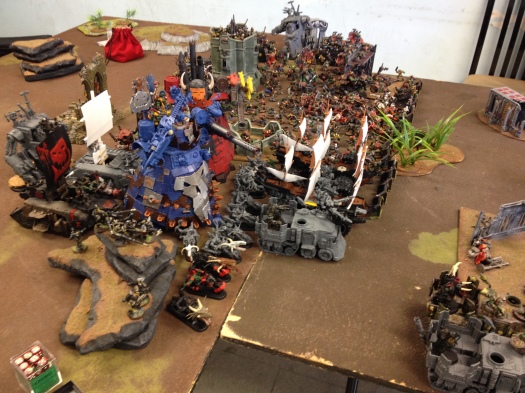 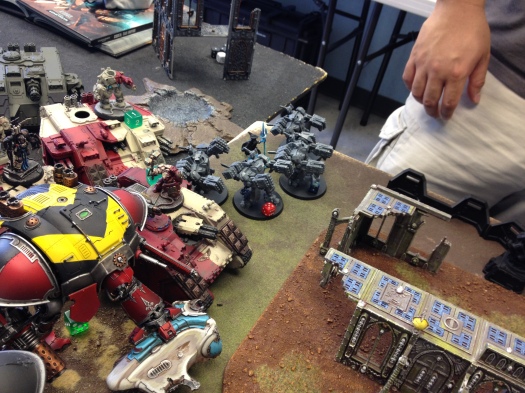 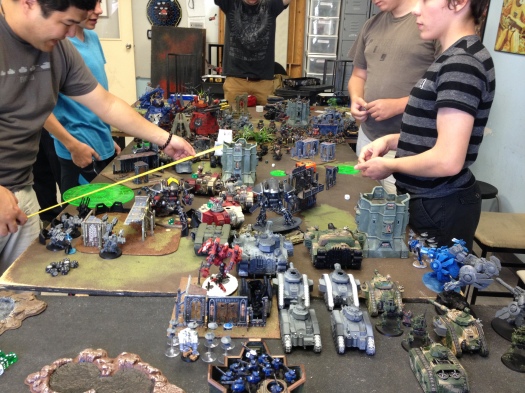 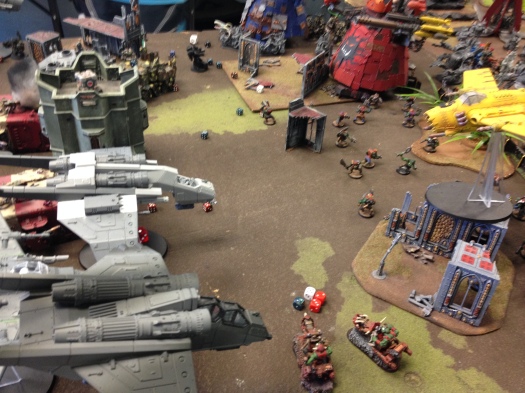 Despite being almost utterly useless in my recent game against the Eldar, the Manticore has been getting a bit of love ahead of the Wyvern just because I love the size of the Storm Eagle Rockets.

So here are some WIP’s of how I threw this thing together.  The missiles are magnetized (haphazardly), but they work well.

END_OF_DOCUMENT_TOKEN_TO_BE_REPLACED 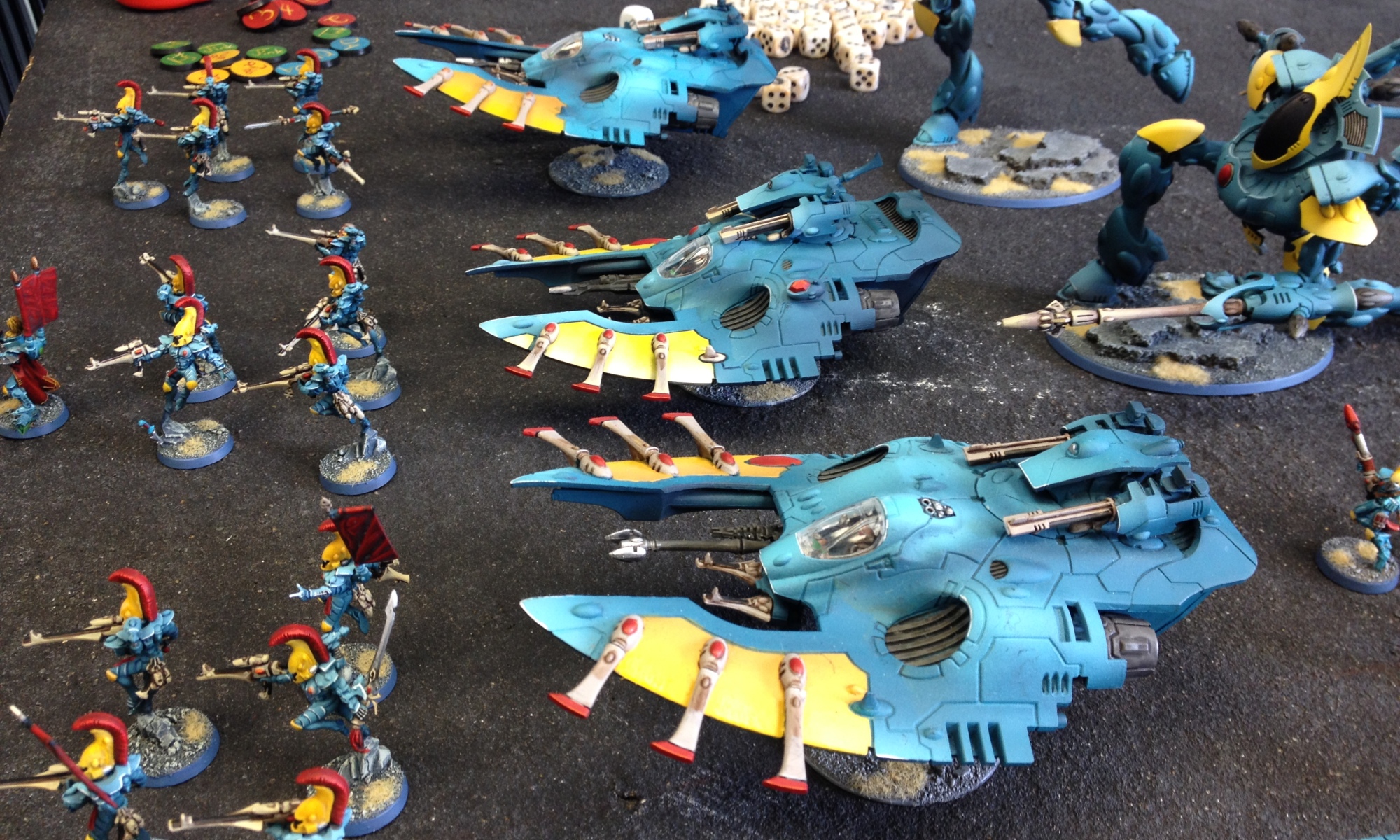 Labour Day weekend gaming!  Woohoo!  Managed to get a fun one in with an Astronomicon veteran.  This was his Tourney list, and I believe he said he played it into 10th place or so (out of 50).  We opted to run the GW standard missions (diced off) for this one, just to see how this would run down.

We rolled up a Maelstrom Mission: Tactical Escalation.  In the past, this mission favours the force that can stay mobile the longest.

Eldar deploy first, and are largely in the open, though separated for safety reasons (there is a Manticore on the table).  Guard deploy similarly, with the Russes in the open, and the Chimeras and Sentinels deployed behind various chunks of cover in order to take the edge off the Eldar shooting…

Which of course didn’t matter anyways, because the Guard seized the initiative like total badasses.

All hands gun it towards the Eldar lines.  The meltaveterans on the left flank get frisky and attempt to seize one of the mid-field objectives.

Pask and the Vanquisher Russ combine to knock off 1 wound from the nearest Wraithknight, but the Punisher cannon was kept in strategic Reserve.  Firing with Power of the Machine Spirit from the nearby Enginseer, Pask rends the Autarch’s Wave Serpent to death.  He wound up jinking a few of the hits, but not enough to save the transport.  The Autarch and Dire Avengers escape without further incident.

Artillery fire gets nothing done, and the Sentinels only achieve in knocking a wound off of the second Wraithknight using the Hunter Killer Missile barrage (so much for THAT).

First blood and a Maelstrom VP means that the Guard have gone out in front 2-0 in Turn 1!

The Chimera in the centre of the table is claimed to a Serpent Shield on the side arc, but the passengers bail out with no significant incident, although they were shaken in the penetrating hit.  Heavy Wraithcannon fire also knocks out the Vanquisher cannon.

The second Chimera explodes gloriously as the Wraithknight stomps all over it.  4 Veterans are unable to escape the explosion.

The Autarch and his comrades flee towards the back corner of the board, where there is an objective.

Despite the fireworks display set off by the Wraithknights and Serpents, zero VP’s are scored by the Eldar, after Turn 1 is completed, the Guard hold a 2-0 advantage.

2/3 Chimeras already gone, the other still in Reserve, the Guard’s mobility options are (already!) dwindling.

The surviving veterans form up to become a protective defensive line across the front of the Leman Russes, which cower back towards the rock formation in the face of what appears to be certain doom.  Instead of splitting the fire of the Leman Russes, Pask elects to utterly crush one of the two Wraithknights under volume of fire from both Russ tanks.  This is all well and fine, but all it takes is one volley from the Punisher Cannon to bring it down, leaving the recently repaired Vanquisher Cannon, 2 lascannons and 4 plasma cannons to twiddle their thumbs.  The Knight is perforated via Rending, and goes down hard, Pask’s second big kill of the game.

Not waiting for a more dramatic moment, the Vendetta gunship comes on and forces one of the two remaining serpents to jink.  The Plasma veterans who were kept in reserve also come on, and roll onto the right flank, which was largely unprotected.

Artillery again, resolves nothing, but forces the second serpent to jink. The Wyvern may have also claimed two of the Dire Avengers who are conga-lined on foot behind the cover at the back of the Board.  Some excellent rolling at the armour saves (6/8!) really did the Eldar well.

“Pask must die a thousand deaths” are the words that I recall hearing at this point.

The Hornets come on the board via outflank, and appear to be very angry.  Blasting away at the rear arc of the Vanquisher, it goes up very quickly.  Many hits are scored on Pask himself, but he survives with one hullpoint remaining, and is shaken (not stirred).

The Swooping Hawks, which needed a 2+ to come on to the board, roll a 1 and will need to wait another turn before they come on via deep strike.

The second Wraithknight looks a bit pissed off, charges and wipes out the blocking veterans from the central squad, leaving Pask shaken and shooting a breeze with only a 6 man melta squad between him and certain death.

The second Serpent rips the lascannon off of the nearest Sentinel.

After two turns, no one has actually made any progress on their objectives, so the Guard maintain a 2-0 lead over the Eldar.

Only to find it already dead, from a Power of the Machine Spirit’ed Punisher Cannon, to over-ride the Shaken result.  The Wraithknight goes down hard, Pask’s second Wraithknight kill of the game.  The Enginseer gets the assist on that one.

The Vendetta instead unloads on the Serpent beyond the Knight, and forces it to Jink, and knocks off a Hullpoint.

The Manticore attempts to extricate itself from its position in cover in order to achieve a firing solution on the nearby Hornets (which are barely within 24″, but manages to immobilize itself (!!!).  Those Hornets are safe for now…

Precious little else is accomplished this turn, but killing the Wraithknight is worth D3 VP (which works out to be 1, darn).  3-0 the Guard lead after 3 turns.

“Pask must die a thousand and one deaths,” I recall hearing at this point…

The hornets climb the embankment and sink an unholy amount of pulse laser shots into the side arc, finally killing the Knight Commander.

The Swooping Hawks also come on, and wipe out the remaining 6 Veterans on the left flank, which were harassing the Serpent as it was coming on.  They’re now sitting on top of the Victory Point that Pask has recently vacated, but is still being contested by the Wyvern!

Due to the way the shooting works out, the Wyvern lives, for now, but things aren’t looking good for their outlook on life.  As it stands, the Wyvern is the only thing stopping the Eldar from taking the nearby objective, which would actually be worth 2 VP once it eventually is captured.

With Pask dead, Slay the Warlord, and various other objectives completed, the Eldar tie the game 3-3 after Turn 3.

The Wyvern unloads a full volley danger close and wipes out the Swooping Hawks with a little help from the remaining Chimera lurking in the back-field.

The Vendetta, lacking targets (caused by flying maneuverability issues) flies into the Eldar backfield and vaporizes two jinking Eldar bikers, making the final jetbike fall off the back of the table.

The last Storm-Eagle rocket makes a Serpent Jink, but falls hilariously off-target.  Manticore achieved precisely nothing this game, immobilizing itself, but making a Serpent jink pretty well the whole game.

The Sentinels advance a bit further, and attempt to charge the Serpent near one of the mid-field objectives, but roll snake-eyes on the charge distance, needing a 7 for a successful charge.  Ho hum…

The Wyvern needs to die in order to capture the objective he’s contesting.  The Hornets shuffle around, and oblige him in a hail of Pulse Laser fire.

The Serpent that had been harassing the Leman Russes and Veterans previously unloads its cargo, who take down the Enginseer, removing any hope of resistance on that flank.  Only the Sentinels remain, loitering around mid-field.

The fate of the game now hinges on the fate of the Plasma Veterans, who are holding onto one of the final objectives, which is worth 2 VP to the Eldar player…

The Vendetta drops into hover mode, and nearly blows away the Eldar Autarch.  One more hit would have been good for Slay the Warlord.

The Plasma Veterans dig in for what will likely be a heroic last stand.

The Sentinels run onto a mid-field point, to secure one of the final VP’s.

In total, the Guard achieve 3 objectives, going ahead 8-5…

Out of the gate, the Eldar player draws 3 more tactical objectives which are effectively already achieved.  Regardless if the game ends, it will be a Draw, but if the Plasma Veterans are removed, and the Eldar can run onto the recently vacated point, it will be an Eldar victory…

The shooting begins…  The Wave Serpent on the far-table edge knocks out the transport.  The Pulse Lasers from the Hornets knock out 4 of the Veterans… The Dire Avengers who just bailed out of their transports kill another 3, and roll for their fleeted-battle focus…  They needed a 5, and got less than that.

The remaining Vets wound up breaking and running, so even though the Eldar failed to remove all of them, what really hurt them was not being able to get onto the point.

The dice roll for the game means the game is over, resulting in a 9-9 draw.  Both armies scored Linebreaker in the secondary.

Had the game continued, it is very likely that the Guard would have either been tabled (only an immobilized Manticore, 2 Sentinels, and hovering Vendetta remained on the table), or the Eldar would have scored any number of their Tactical Objectives for the win.

A fantastic game, I personally believe the Guard were lucky to get away with a Draw.  A perfect result for a very back-and-forth game.