Since I’ve made some pretty drastic head-way in the Derpideo conversion, I haven’t really done too much.

Wait, that’s not really the case.

I also got in a great game against a Space Marine Player, whom you will probably recognize from a previous battle report.  I brought my Tyranid Highlander list to test out against is own Highlander list… and well, I got tabled in 4 turns.  My MVP was the Genestealers, who wiped a unit of scouts (LOL) and ate a Whirlwind.  That’s not saying much.

I don’t run into Grav Centurions very much, but these guys have an unholy amount of shooting.  They managed to wipe the Swarmlord and his buddies in a single round of shooting, despite having Catalyst off.  Emphasized the need for a mobile cover save (Venomthrope or Malanthrope, I guess).  The Trygon prime suffered the same fate, and the Carnifex wasn’t far behind them.

Since it was Victoria Day weekend here in Canada, I had an opportunity to paint and do yard work yesterday, so I got another one of those pesky Death Company models knocked off.  They have so much bling it’s hard to get any kind of production mojo going like I can get base-coating the ‘Nids.  I like fast, instant results more than painting jewellery… Anyways.

That’s it for now!  Anticipate more posts later this week.  🙂 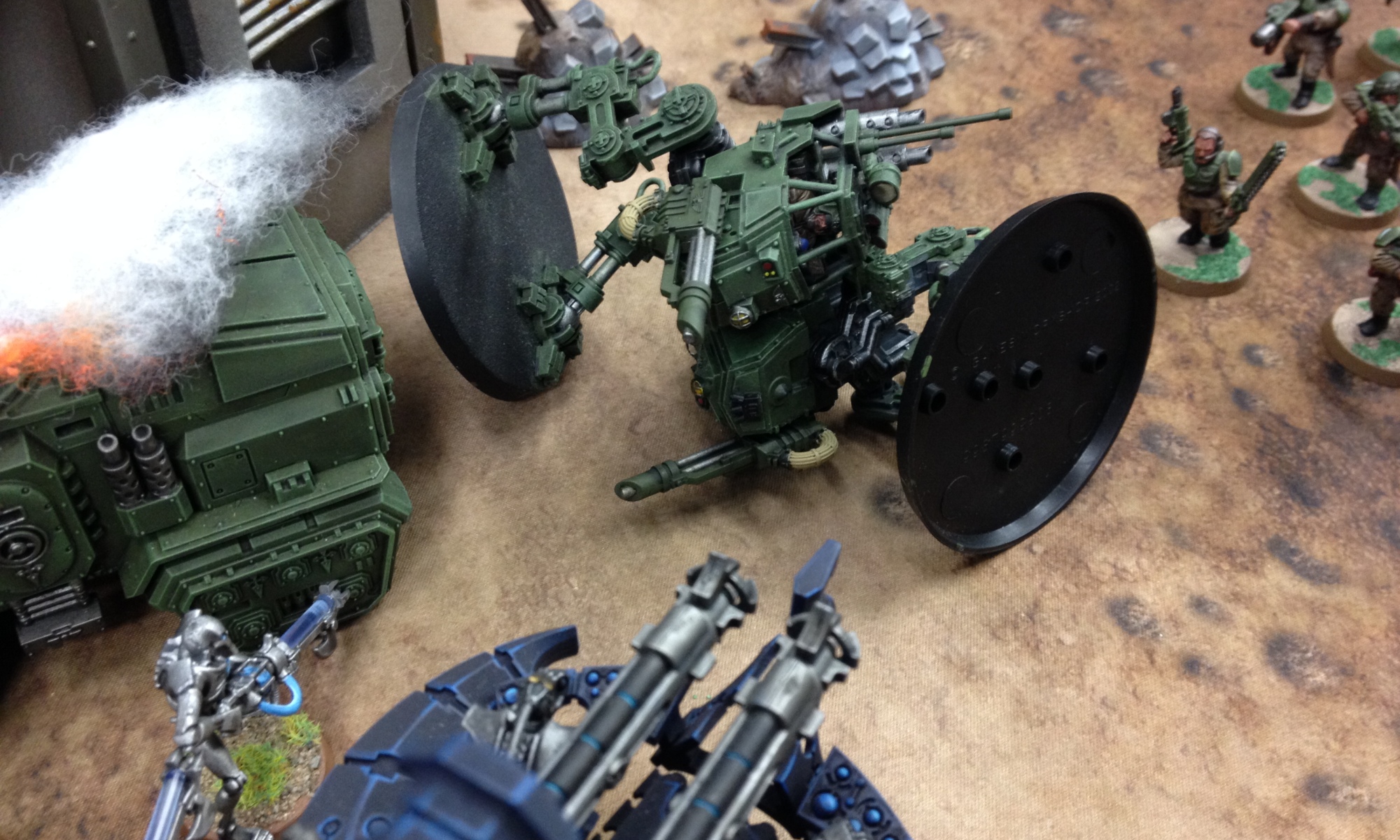 Remember when I mentioned that I got absolutely rocked by Necrons at the MWG Studio? Here’s the proof.

Although overall I had a great time throwing dice, ultimately I couldn’t take too much pride with how my Guardsmen did. They’ll have to come back wiser, and stronger.

MWG has some pretty awesome studios, and it was a bit of a brain twist to see a highly organized and professional organization existing solely because of plastic mans.  Crazy. 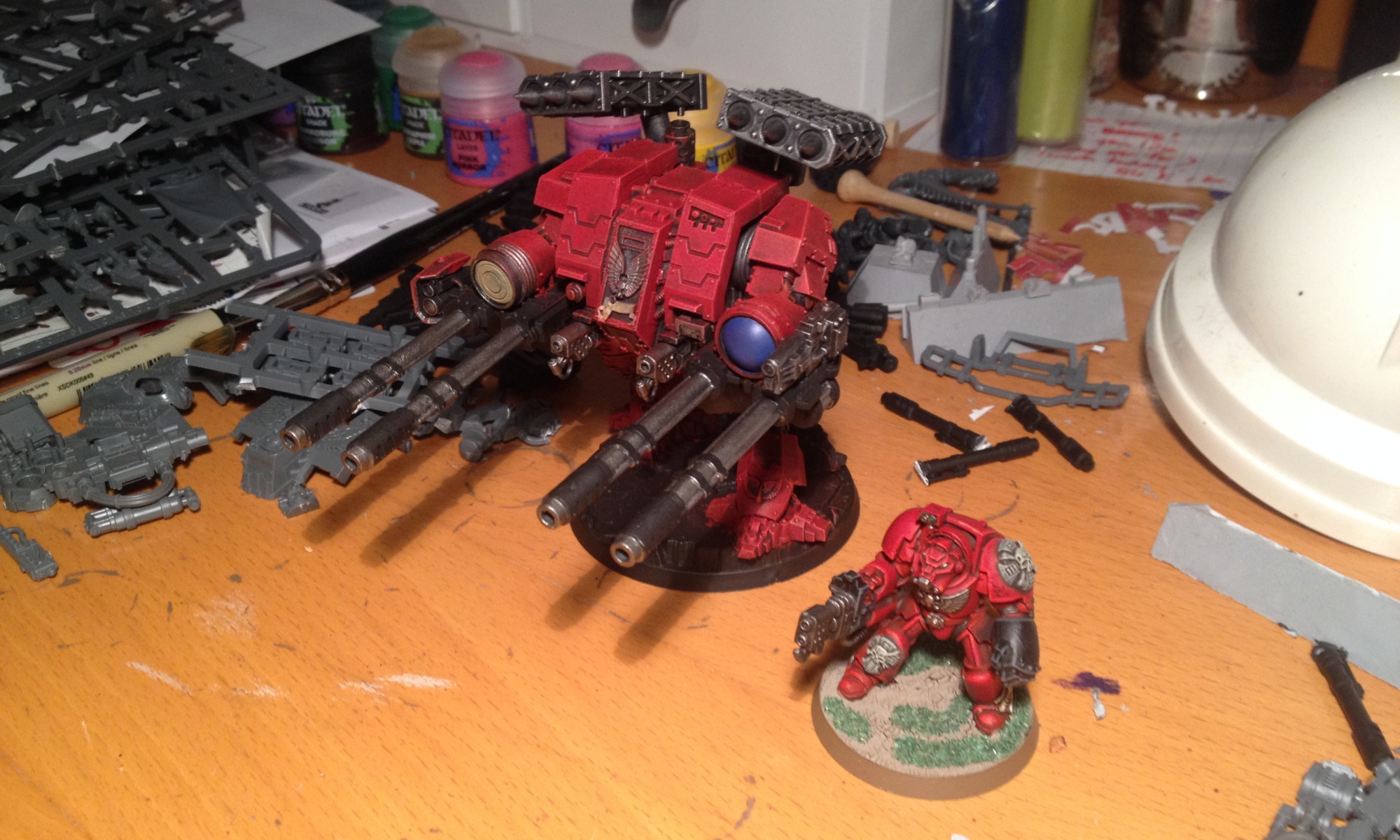 I know I shouldn’t apologize for these micro posts, but man…  Kinda proud of how he’s coming together…  So bear with me… END_OF_DOCUMENT_TOKEN_TO_BE_REPLACED 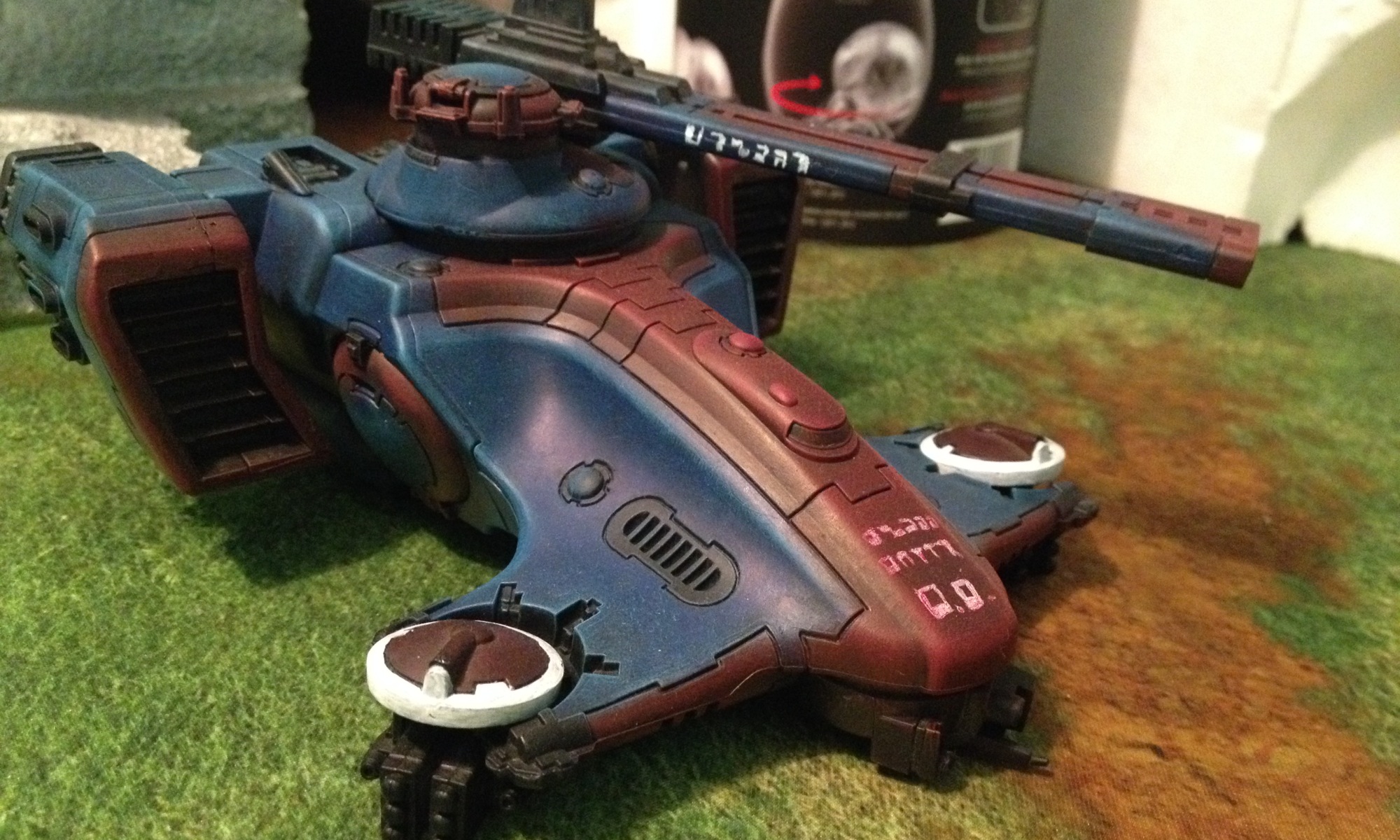 I have no real good reason to post it.  I just found it in my dropbox and wanted to share.

I painted it in 3rd edition before I knew what washes were, or how to drybrush.

Since I’ve picked up the game again as of a few years ago, I’ve gone over it again with a light drybrushing to add some depth of the colour.  You can really tell over top of the lettering I used on the nose.

Anyways.  “Black Betty” will likely be carved up and fed to my Orkz in the future sometime.  They loves them some Tau bitz. 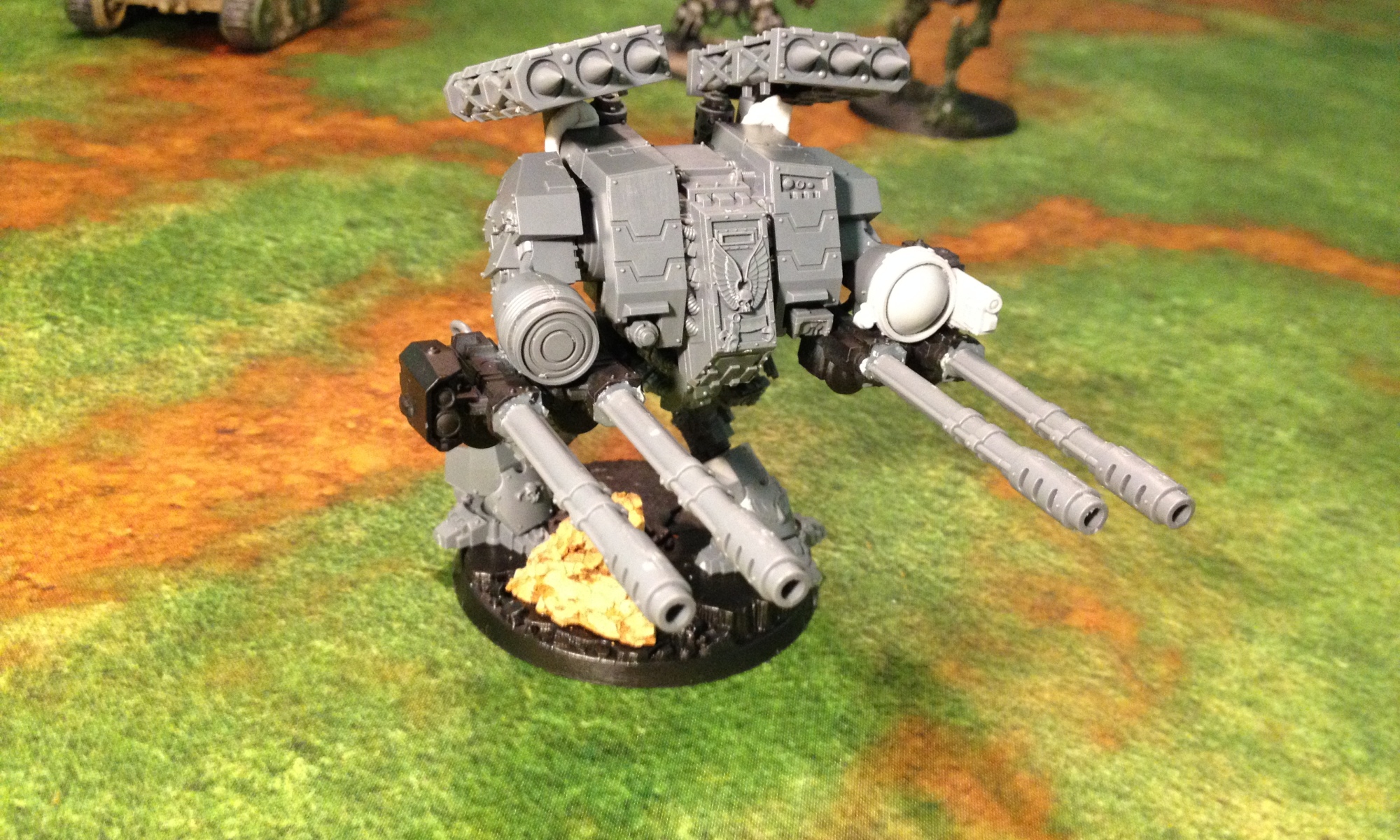 I’m having trouble typing, I’m so thrilled with how this guy turned out.

Some things I’m still mulling over — The mounting of the missile launchers on the top is a bit complicated, but nothing I can’t work through.  I might magnetize them and in so doing make things very simple…

I’m also debating the Cyclone missile Launcher in lieu of the Taurox Missiles… but the Cyclone is cute whereas the Taurox is RAWWR.  And lets be honest, there’s nothing subtle about this thing.

So yeah.  I’m like, beyond stoked.  He just vaulted all the way to the top of the painting queue.  MUAHAHAHA. 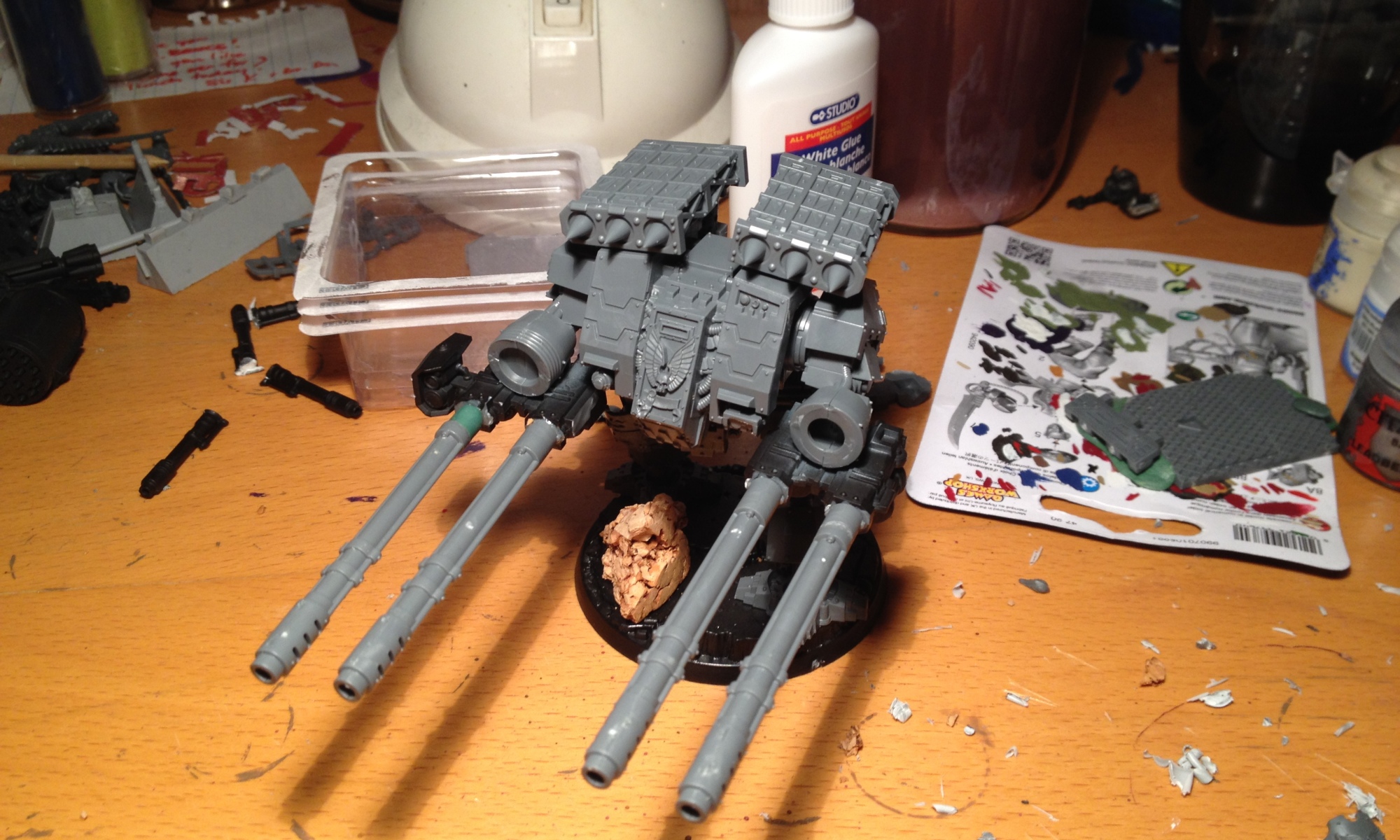 I teased this before, but here I’m going to show off some progress and throw it open for comment.  There’s a couple of issues with respect to this build so far, and I wouldn’t mind getting some suggestions!